Five Things That as Feminist but are NOT!

Was it even love? 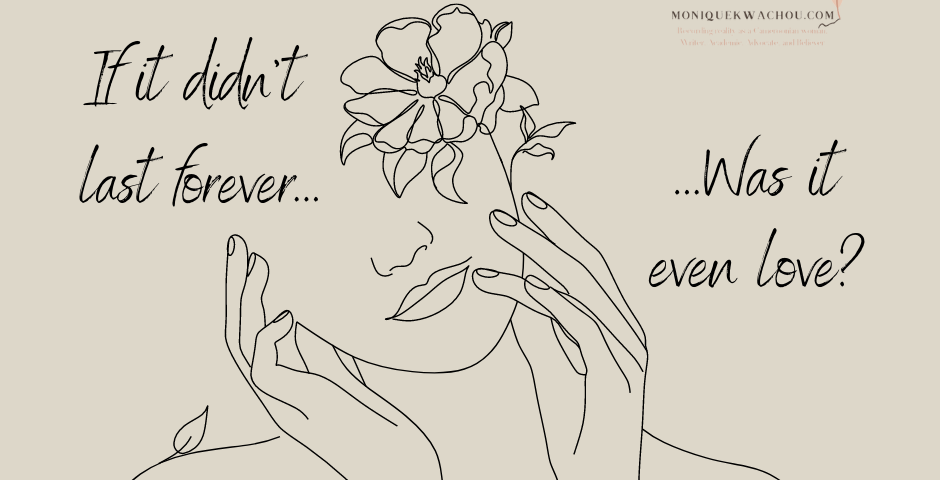 You may be familiar with the philosophical riddle that goes “if a tree falls in the forest and there was no one to hear it, did it even fall”? That question which is typically used to question the value of the unperceived came to mind tonight as I considered how best to write this post and share a lesson I learned last year about relationships, and how conditioning within a capitalist society has warped perception of them- particularly perceptions of romantic love.

You see, that riddle can be rephrased in a hundred different ways:

“If I saw a celebrity without taking a photo with/of them did I even see a celebrity?”

“If I worked out without my fitness tracker to record the evidence, did I even work out?”

“If I learned something new about the earth, or history, or space… or picked up a new skill, but can’t use that knowledge to get employed or progress in some socio-economic manner… then is that knowledge even worthwhile?’

If I had a relationship, whether a beautiful affair or a strong sisterly bond that took me to new places, exposed me to new ideas, preoccupied my days, and softened life… but that relationship ended in three months, or after 3 years… Then was it even love?

The tree in the forest question can be recognized as a riddle, but the above questions? Well, I have asked myself at least two in a non-rhetorical manner. People say we’re in a “picture’s-or a-didn’t-happen generation”. It’s more like we’ve been conditioned in a “productive or it is not worth it” society. Our knowledge is only deemed valuable if it can be used to produce income (in fact, we’re told to monetize our hobbies), exercising is only appreciated if we have the before and after photos to show off our “gains”, and similarly, love is only worth talking about if it lasted forever.

But that’s the capitalism talking.

Although it is harder to recognize it; dismissing the value of a relationship because it didn’t end with happy ever after is just as silly as the other capitalist metrics of love… the cost/size of one’s engagement ring, amount of their dowry, the extravagance of their wedding, etc.

This particular metric of longevity is silly because it is built on the capitalist deception that success is an end rather than a meanwhile. Whereas there is truly no end in life; it’s literally (overwhelmingly) one thing after the next. So even ‘happy ever after’ likely had its own ups and downs.

The lesson I learned about love, and myself was that I have been doing a great disservice to myself with this “must-be productive/lasting” perception. Just like when our parent’s made the decision to buy the ugly but more durable school shoes over the fancy ones we liked; or when they would tell us to wait for the “right occasion” to wear the pretty dress we received as a birthday gift… so too I often find myself deciding not to go on a date because “this won’t go anywhere”. I, just as they were, have been trying to maximize the use of a commodity (although love shouldn’t be that), and invest in only that which would last.

I envy those who have learned to live in the moment so much that they know it is enough is all the date did was introduce you to a new restaurant, a new artist, and broadened your views. Because life is short.

I’m not sure I’ll be one of those people anytime soon but I admire them.

Still, I have changed to some extent. I no longer consider that friendship or affair that ended as a failure. I can now appreciate it for what it was; a lovely, life-enriching experience. Because it is enough if all that love did was hold you on the nights you needed to be held; it is more than enough that the friend you now barely interact with once helped you apply for the opportunity that launched your career. And because of this, Tennyson’s famed words “better to have loved and lost than to never have loved at all” ring true. In fact, some lost relationships are likely far more valuable than some family relationships which will indeed last forever, under the compulsion of kinship.

You not only do a disservice to yourself when you define your relationships in a productive manner but equally to those who relate with you; because it is such a perspective that justifies our erasing them from our memories because they didn’t live up to all we wanted them to. It is our thinking that everything has to “go somewhere”, and people we’re with must be constantly ‘adding’ to us (just as the institutions we work for require) that has us claiming to ‘cut off’ people with every New Year.

But we (like the institutions we work for) must realize that everything has seasons; people too, relationships too. And the end of a season should not define the entire experience/person, just like the whole year can’t be summed up by the bad rainy season. Because prior to that there were days so beautiful you shared food and wine outside with friends. So if (like me) you must measure; measure by the memorable moments, what they made you feel, and how they grew you to who and what you are today. Remind yourself of all that person’s presence in your life gave you before it came to an end. Perhaps you needed that brief love to take you out of your comfort zone, to help you unlock a hidden passion, to expose you to something you’d been blind to. Perhaps it was meant to be and meant to end. So whether it lasted for a week, or three months, it happened; it filled you up, supported you, and served a purpose in your life while it did. Love happened.

Just like the tree which fell in the forest, it happened. And even if no one else heard it, even if it never arrived at the stage where you could share it with others and celebrate it publicly. It happened.

There’ll be evidence in other ways. In the case of the tree, others will see it on the ground and know there was a sound made… and in your case, the next relationship you’re in would be easier because of the lessons learned from the experience of the last.

There is always evidence.