Straight Outta My Bookshelf: Behold the Dreamers by Imbolo Mbue

An Ode to Those We’ve Lost

Last month I visited the United States briefly. After having spent almost seven years of my childhood there and returning home to Cameroon indefinitely, this trip was my first in fifteen years. Messages from friends spanned from “watch out for the police” to “buy me shoes” to ” we hope you’re coming back”.
One particular writer friend wrote me asking how long I was traveling for. When I told her I was just going to be out for just over a week, she had this to say:
“Ah okay. I’d been worried that we’ve lost another ????????????
Not that I would have told you if you were moving. I’d just have said congratulations and all the best and stuff like that. Then wished I had all African Presidents on speed dial so I could berate Biya for losing [another] top brain”
It is this comment in particular and the experience of the trip which inspired this post.


I traveled for a conference, my first academic conference. I was happy, proud of the achievement, but above all proud of the fact that I was going to the US on my own merit and for my own purpose after years of witnessing first-hand the lengths at which people go to leave Cameroon. As happy and proud as I was, I was also nervous. First about the conference, then about meeting family and friends I had not seen in fifteen years.
I am not the Monique I had been before, life and various experiences which had come my way had changed me to the complex being I am now. And I am still changing, and metamorphosing to my fulfillment gradually. Would they respect that, I wondered.
Or would they look at me with the prejudiced ideas a lot of those abroad have of those back home; that we are all just making do, that we all wish and pray for 1st world lives. I went in prepared to dispel myths, ready to make it clear some of us could ‘choose’ to be in Cameroon,  ready to snub those bushfallers who would suggest I stay indefinitely, or laugh at my decision to return home. With this sort of thinking I unwittingly went in with my own prejudice. 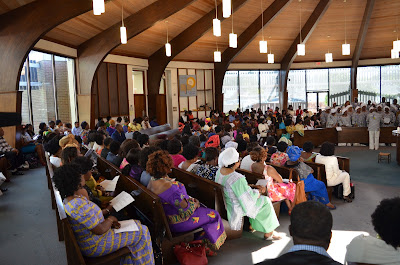 This prejudice however didn’t last long, it began cracking on my first day in Maryland (a.k.a Cameroon annex). It was a Sunday and we were celebrating my younger brother’s baptism at Silverspring Presbyterian Church. All through the church service I ran a commentary in my mind:
Only three white people in this church? The pastor and two elderly…
Are the rest Cameroonian then? Oh, there’s an African-American assistant pastor… probably ninety percent Cameroonian… At least ninety
Lord this might as well be P.C Bastos, I mean look at the outfits, and look at the faces… the choir is singing in Bakweri or is that Douala…The pastor must be resigned, his church has been colonized.
See these kids, most of them 1stgeneration Americans, singing “Everybody blow your trumpet” but without the accompanying gestures. How would they know what gestures to make? It’s close, but it can never be the same as Cameroon…
<==={Cameroonian choir singing in at Silverspring Presbyterian Church, Maryland-USA

With every thought I felt slight shame and a well of pity deepen within me. It is easy to get derailed by the younger bushfallers on social media who would have you think life is forever better on the other side, easy to feel annoyed when the embassy puts you through a tedious process because others have literally used up all the lies possible to get visas and leave the country for good, it is easy to forget that these people who now generalize about Cameroon as much as western media does, are victims. Yes, victims of the government that did not care for them. Victims aren’t always blameless, they don’t need to be. They are the injured party nonetheless.

I was reminded of this as we closed service that morning and I was enveloped by the crowd of Cameroonians welcoming me to the country they were yet to consider their own. Most of them were elderly women, my mom’s friends and senior, each of them hugged me tight as though hugging the place I came from rather than me, they each had the same questions on their lips “How is Cameroon? How is home?”
If anything, it was obvious that irrespective of better standard of living (based on GDP), despite the guise most would put up about their American life, these were people walking around homesick. These were mothers who longed to retire but cannot do that with others depending on them and never ending bills, these were brothers who missed simple pleasures of a cheap cab ride to a bar where the barman might as well be a family friend.
I had hoped the people I met would recognize and respect that I was not the same Monique, but not until that moment did I respect that those people had also changed. While there were still those who could care less, the majority were more up to date on Cameroonian news than those back home. They were not all the eager bushfallers they once had been, a lot of them had left Cameroon by choice but were now trapped out of it by circumstances. They now wondered if their kids would consider Cameroon home as they do, and try not to let it matter even though it does.
About ten days ago, after the fatal Eseka train crash rocked the country, several comments bemoaned our having a president who obviously lacks a sense of duty to our country. The nation collectively mourned the lives we had lost to negligence. In a Whatsapp group I’m in, my friends took turns comparing what the worse consequence of our president’s rule has been. The corruption? The tribalism? Embezzlement? Laissez-faire culture? A failing healthcare system? The hazardous transportation system? Unemployment and underemployment? Each one of them justified their points. It was a pitiful sport but I wanted to participate and looked for a way to express how we have lost more souls than those dead in the recent crash, the regular road accidents and as casualties of our healthcare system.
I looked for a way to briefly describe the images I had seen in Maryland, people attempting to reclaim home with overpriced imported foodstuff, clothes etc., fathers who in the course of conversation would allude to something you could only understand if you had lived in Cameroon and then experience a moment of disconnect with their children…
I tried to describe the resigned pain you feel knowing your brother will never consider Cameroon home, or that your cousin who is in Cameroon now would probably sell their own soul to leave the country for good if he could. I attempted to explain the frustration that comes with being in love with someone yet separated because one of you cannot get a visa and the other shall not return home to nothing, or finally the fear that your mother may never retire as she dreams of…
Truth is none of us can truly win such a pitiful debate. There shall be a million negative consequences of our government’s cruelly careless #33years rule, but from my present vantage point, it is the brain drain, the loss of our own and loss of belief in our own that shall remain as this regime’s worse legacy
Let us hope one day we can undo this and fix the rift this poor leadership has created.
Share
0