What Day? What Are We Celebrating?

An Open Letter to My Sisters on Internalized Sexism and Sisterhood

How are you? How is Women’s Month treating you?
Permit me tell you a story.
One of my clearest memories from my undergraduate studies was of an assignment that required us to write on cultural practices which were abusive or violent towards women. We were encouraged to speak to older women, like our grandmothers, who would be more aware of our specific cultural traditions. As my grandma is no longer with us, my source would be the mothers of some family friends. One from a Southwest tribe and another from a Northwest tribe. I asked the former to tell me about the practice of Female Genital Mutilation (FGM), and with the latter I discussed the practice of breast ironing.
It is worthy to note that both these women looked down on my studying Gender Studies. While they enjoyed empowerment particularly a woman’s right to work and earn her own money, they like many others, didn’t like the word feminist and disliked any studies which promoted it. But they were willing to answer my questions.
And thus while in the course of discussions with them, I brought up what I already knew. The practice of FGM was undoubtedly painful and while it claimed to ensure a woman’s ‘purity’ what it really aimed at was ‘curbing promiscuity’ by making intercourse an ordeal for the woman and in sewing up the sexual orifices (making them tighter) ensuring more pleasure for the man. The grandmother I spoke to did not deny this. She said she felt the practice was archaic and very dangerous with the poor sanitary conditions and prevalence of HIV- yet she could not really agree with what I said. She asked me “Are you saying it is a man that got up and decided that women should be cut like that? Are you sure? Why is it that it is women doing the cutting if the only beneficiaries are men?”
Similarly when discussing with Grandma Number 2, I recounted my knowledge thus far on breast ironing. The practice was one where young girls had their budding breasts crushed with pestles or grinding stones (sometimes heated) to discourage the growth spurt. The reason was simple, the longer their breasts remain small, the longer they remained protected from the lustful gaze of men. This abuse was supposedly an act of protection from male predators. Rather than attacking the men with pestles (pounding predators and child molesters with pestles between the legs would be good) the would-be victims were attacked. Here again this grandmother said to me “you’re right, but I have always wondered why don’t the mothers think what they are doing is wrong. Why are they pounding on their children rather than the would-be predators?”
At that time I couldn’t answer, but several years later I can. The answer is simply internalized sexism. The worst, and as I have recently witnessed, the most common type of sexism in Cameroon is internalized sexism.
Let me offer you a simple definition: Internalized sexism or misogyny is the involuntary belief and acting on beliefs of sexist stereotypes about women by other women.
It is simply women being sexist to one another because they have been socialized to believe that certain things are wrong for certain genders or socialized to believe other women are a threat etc.  You see the women who advocate for FGM are assured, they believe that the practice would ensure their daughters would remain ‘pure’. They believe that women (always the other woman though) are promiscuous and to ensure that you won’t be you need to be circumcised. They believe it so they readily act on it.
Fast forward to recent times. Cameroon social media spaces have been abuzz with the Nathalie Koah and Eto’o Fils scandal. In all of that, the majority of both men and women of course dragged Ms. Koah through the mud. She has been called a slut a gold digger, a home wrecker etc. Women often dragged her more than men did. Another case of Internalize misogyny. You see we’ve been socialized to see a woman’s philandering as more offensive than a man’s. Forget the fact that they man was in a relationship (or even married) and the woman was not. How dare she be so cheap? What was she planning? Did she think he would leave the good woman he had for someone as cheap as she? Women said these things. Often considering NK the other woman, the Jezebel they had been warned about. The one we have been socialized by countless Nollywood films to pray against, No one it seems bothers to pray against the philandering man. “Men are weak”, they say, like dried fish soaked in water. They break down easily. And so it goes with internalized sexism, you buy into a stereotype that women are supposed to be a certain way and when they are not you criticize them three times as much as you would the opposite sex that failed you.
Internalize sexism is common, it is the voice of your mother or aunt which resonates from your teens warning you not to “tell your girlfriends everything”. It is the result of the constant competition girls are put up to-“Don’t you wish you had Jennifer’s shape, Annick’s butt, or could dance like Sandra? See as Rachel married quickly, it’s because she can cook….” 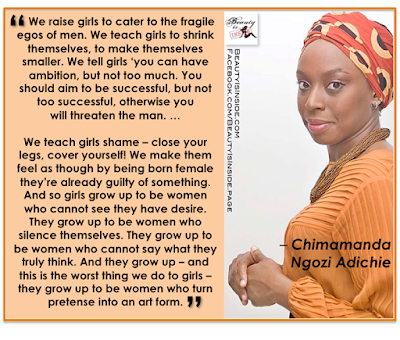 Internalized sexism is almost intrinsic to us, unless you’re really aware of yourself you won’t catch it. You would feel threatened by your maid and permit her cook a meal for everyone at home but for your husband- he must eat on your food. You would see another woman applying for a job in your office and sabotage her, they might end up liking her more than you. You would say I don’t like that woman because she smokes whereas the reason you don’t like her is because you’ve been raised to consider smoking unladylike and yet not be fazed by a man who smokes. You would say that girl is not a good role model she has had to many boyfriends, yet the fact that you judge her is because you’ve been taught that have more boyfriends than can be listed on one hand is a sign that you are cheap. Still you might need all fingers and toes to count your husband’s girlfriend (before university).
We don’t see the double standard when we do it, but we need to.
Every year despite there being an international theme for International Women’s Day (this year’s was- Planet 50/50: Pledge for Parity) Cameroon still coins up its own theme. Ordinarily this would annoy me, but I felt this year the national theme of: “Challenges and achievements in the implementation of the Millennium Development Goals for women and girls” was on point, because quite frankly we needed to make an honest assessment of ourselves.
We need to stop acting like the battle has been won- it hasn’t. There are several challenges and at the forefront of those challenges are our own selves. We need to address our own internalized sexism just as much (if not more) than that which we experience from the opposite sex and institutions regularly. Because if a man told you that you should be aspiring after marriage as your ultimate, you would call him out. So why is okay when your aunt sows the same thoughts in your head?
Like the women who pound the breasts of their children rather than attacks the adults who would abuse them, so are the wives who would go attack another woman rather than their cheating husbands. Those women didn’t make (and break) vows to you.
And have you noticed this rarely occurs with men? Because they have been raised with a lot more confidence, less self-doubt and comparison despite a terribly round belly you would hardly hear a man ask “Do you think I’m fat” Just as you would rarely hear a guy attack another man having an affair with his wife (not saying it doesn’t happen- just rarely). Back to the NK/Eto’o scandal as an example, how many guys did you see call out Eto’o as a cheat? Few if any I’m guessing. We could all say NK was wrong and a “bad woman” but you’d be hard pressed to find a man who would drag his brother. It is common knowledge that the brotherhood is strong. It is almost as thought there is an unbreakable vow taken among men: you will never tell a girl your friend is cheating on her…. yet with women the vow bends and is twisted to “well you could tell him if you like him,,,
Some might say we’re being “good” telling on one another, but is that all it is? 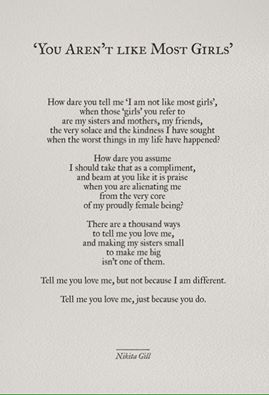 The majority of us have acknowledged that there is a problem. That there are gender inequalities. What we need to realize next is that we aren’t going to solve these problems singularly. We need to realize that in making statements like “Most of my friends are boys because I don’t like drama” or claiming “I’m not like other girls” as though other girls were a homogeneously flawed group we have to separate ourselves from- we further encourage those stereotypes.

We need a sisterhood. A strong, vibrant, conscious one.No I am not saying we should support women just because they’re women- but rather that we ought to question ourselves and make sure we aren’t reacting as we have been socialized to before you drag a sister down. Ask yourself, would I be okay with this if she were a man? And why?