Our Identity and Our shame

The Transracial Trend…
Please have a look at my picture in the about section of this page. Have a good look, read the bio.               Imagine this: I have been reading about Jewish culture, taken a liken to it, truly appreciate the suffering they had to face during the Holocaust, then I decided I feel more Jewish than Cameroonian. So I take up the hairstyle and dressing of Jews. I buy a wig or scarfs for my head. I lie about my background and receive a scholarship from a historically Jewish University to study Jewish History. I graduate and become a spokesperson for the Jewish community. Imagine all this happening, then when caught I feel I did nothing wrong. I “identify as Jewish”. Sounds crazy right?
Well, as some writers would be quick to tell you, reality is crazier than fiction. Everything I just described happened except it what an American Caucasian who decided to “identify” as a black American. Lie about her race to the point of having someone claim to be her father. She has received scholarship from a university that was created to give black Americans opportunity in a system that was never created for them. She did all this and when the public went for her, some people abused the term transracial to defend her actions. Transracial is a valid term used to define the unique perspectives of someone who is adopted by a family of a different race, however defenders of Rachel Dolezal now use it to refer to the decision to “identify” as a different race and dress up impersonating people of that race.
However this post isn’t so much about Rachel Dolezal and being transracial such as it is about “identifying” as black and what is has meant for me. You see, Dolezal made me wonder about lot of things. For one she made me wonder if she’s crazy. It has been fairly proven that being black in America is not a smooth experience so why did this woman want to switch race so badly? I’m suspicious. We have reasons for everything we do. Stupid reason maybe, but still reasons.  Secondly and most pertinent to this post, Dolezal made me wonder what she perceives black to be. You see I’m truly curious about this because I have not always been “black”. Yes, really!
On Being black…
So, I have not always been black. I have been African, Cameroonian, Bami-Anglo, but not black. Where I come from there are no race arguments because we’re all one color though of various shades. We have better things to classify ourselves by; social class, region of origin, tribe, language group, religion. But my blackness starts and ends when I board a flight and cross the equator. That’s one thing Rachel Dolezal and I have in common; we have not always been black. Given this mutual experience of on and off blackness I wonder when Rachel Dolezal began feeling black. What made her black? Was it watching enough episodes of Moesha and Fresh Prince of Bel Air? Was it the study of black history and being able to narrate/discuss black literature? Was it the moment she fell in love with box braids or the affection she developed for caramelized skin? From Rachel’s appearance and her impersonation, I cannot find more “experience of blackness” from her. 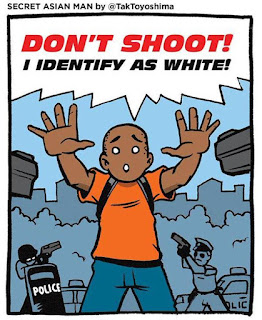 And this irks me particularly when I recount the episodes that made me “feel black”. I felt black when a Caucasian lady seated next to me on a flight asked for another seat and was given. She stated her discomfort and asked that she be position elsewhere. The Kenyan seated to my right shook his head as her request was granted. I simply made a black power fist in the air then returned to my novel. I have changed hairstyles from permed hair to dreadlocks all the while in Cameroon. It never made me feel as black as I did when I was stopped in transit my passport and documents checked for over thirty minutes answering questions on where I was going and where I was from because my documents didn’t serve enough as proof. If you don’t get the drift, I have felt black mostly in circumstances of social classification while away from home. In my experience being black IS a social construct as Dolezal and her supporters insist.
What I am wondering is when she has ever been boxed into that construct. This seem highly improbable when Ms Dolezal identified as white when police stopped her for a speeding ticket, when she herself identified as white when suing a historically black college. Her identity is her choice I agree. But with certain identities come stereotypes and bias and oppression and shaming. I would like Ms. Dolezal to tell me when she has felt that which is so much a part of the black identity. Has she ever felt jittery when entering a shop, like the security guard was looking particularly at her? Can she relate, truly relate to the #MikeBrowns #TrayvonMartins and that little girl at the McKinney pool party? Where does her blackness stop and where does it start?
And the need for shame…
As I ponder on this I realize all the times I felt black, I felt immigrant too. Welcome but not quite. And all these times I have felt the shame of being “guilty until proven innocent” and being someone who needed to be helped. Now some god soul might say here “you should not feel ashamed of who you are”. That good soul will be wrong. I do not feel ashamed of who I am, I feel ashamed of who I am perceived to be because I have not done more, my leaders have not done more. Shaming is itself a large part of African and black culture. I clearly remember the “Bottom 10” being called to stand in front of the whole school and being shamed for their poor performance. I recall being shamed for something as simple and unintentional as wetting the bed at age of six. Today we can see various viral videos of black Americans shaming their kids for all of Facebook to see.
But this shaming seems to have an invisible endpoint where I feel it ought to begin. We don’t shame our elders who misrepresent, sell the future of our youth and act wrongfully. We don’t shame our leaders (neither religious leaders nor government leaders) who misuse power, who abuse us, who in sum contribute to the shame we feel when we leave our country and are treated to the condescending stereotypes. Why is it so easy to shame a child who lies but forbidden to speak against the politicians and faith leaders who do so, and more recently a White lady who has done similar?
Why is it so easy to embarrass a child for their behavior claiming it will make them more conscious in future “they won’t dare it again” but much more difficult to shame those who owe us accountability. I see images like those below every day on TV and on the train, advertising Africans/ immigrants/ blacks in their various moments of distress and helplessness. These are my various identities. 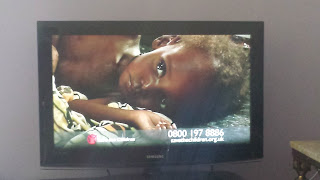 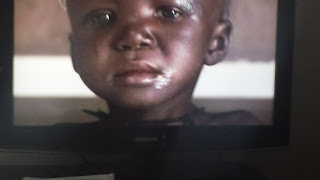 Rachel Dolezal may decide she wants to be black, but that already shows she can’t be, you see blacks do not and have never had the option to choose a social construct that has oppressed them. The ability to make that choice and have people support you is already immense white privilege. I will accept the misuse of the term transracial to describe Rachel Dolezal when she can tell me she has been given the same abusive, discriminatory and shaming treatment black Americans have had to endure for decades.
Meanwhile I’m waiting for the breed of African leaders who feel shame, whose stomachs turn when they see posters of an African child in despair being pasted on a metro bus in a Western country.
Share
0