In The Name Of God

I was helping a friend’s daughter with her homework the other day, and she all of nine years was defining the word apartheid. I had the notebook, with the teacher’s definition on it which this little girl is expected to memorize and reproduce, whether she understands it or not! (let me not get into that just yet). Well as was to be expected the little darling forgot some words, the latter part of the definition which linked it to South Africa. But what she stated “Apartheid refers to a discriminatory system which gives privileges to and allows the minority to control the majority…” Now lets not concentrate on whether or not this definition is correct text-book wise but it gives the idea, and it gave me an idea too, that apartheid as per that definition was not secluded to South African and still prevails. It could even be said, the original apartheid was men’s control of women- and it still goes on.

If genetics is understood we see that with the crossing of the female XX chromosome and the male XY there is a 2:1 likelihood of having a girl than a boy. IF this serves, women have ALWAYS outnumbered men. Why then does this ever increasing majority remain the underprivileged, plight-stricken and pitied image we see every day? A befitting issue to ponder on don’t you think?
Looking back at that definition let me support the claim that gender inequality was the original apartheid. It has already been biologically proven that women have and probably always will be the majority, now about privileges? From culture to culture men have through norms and values of their time reserved certain things from themselves, be it the right to eat eggs, to wear trousers, to drive, to vote, to marry more than one spouse, to flirt- without being scorned-, the right to education, a particular type of education, and the right to be religiously ordained. These privileges prevail, some hold strong till date.
Gender inequality is a universally accepted fact and some people would say it is rightly so “men and women can never be the same” they say; they only expressing their ignorance. Equality does not mean sameness; we can never be and shouldn’t even try to be the same, yet we should agree that a kilogram in feathers and a kilogram of rocks though so different are still equal in weight.
So if it is agreed that discriminatory system exists as a result of gender inequality, and also that though women have always surpassed men in numbers, the men enjoy privileges by this system, then fitting the definition above, women have been victims of an apartheid for ages.
That proven; a modern mind would wonder why? I mean we are of a time when we have heard enough of women’s feats to know that women are not “weak” The feminist movement has done enough to show just how much women toil and extol their might. What a man can do a woman can do better is a modern day idiom extolling a woman’s might. They feed the masses care for the elderly, the sick, they carry heavy burdens emotionally, psychologically and physically, she can endure where a man cannot- we have been told this. We have been convinced that woman is indeed mighty. Yet ironically no matter how mighty woman is she has yet to overcome her apartheid, despite the majority she holds, despite her endurance (or perhaps because of it) she has yet to free herself. She is still pitied, with e quarters of the poorest of the poor being women, with ever increasing reports of sexual abuse, violence and are still denied privileges entrance into holy orders, say in state policies, even a right to wear certain clothes and drive in some countries. Why I wonder, despite the woman’s might is such discrimination, suffering and abuse her plight?
Here’s a theory: one can only be as strong as their mind. As such women can never be that strong. Our minds you see are controlled by men. From the way we dress, to the jobs we should do in one way or the other, indirectly or directly, men control us. Now someone may say here that I’m tooting the feminist horn and women have come far from the old days, I would agree yet say that is limiting, I am doing that and more. Feminist may say women are controlled by men as to the opportunities given, but the thing is feminist themselves have begun being controlled by men in the opportunities they are hunting for. In the quest for equality some have veered off to seek to prove sameness that they too can be “men” and thus imitating them we fall indirectly to the old trap of following the path set by men being what they are rather than what they want us to be, yes, but still not being who we are meant to be. Our society from time immemorial has called on the female to be attractive to the male, whether it is by being able to cook and run a home as in the olden days or look like a playboy pin-up as is today, women have been reared with the idea that they are only as good as men think they are. You are only sexy enough if when you pass a guy lets out a wolf whistle. And you are only brainy enough if you can outsmart the guys in your class as well. It goes to prove the saying that when you belong to a minority you have to be better in order to have the right to be equal. 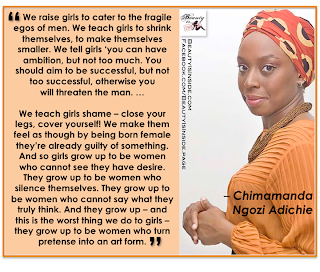 Women are further reared with the idea of what would be ladylike, what they should or should not do, we have so ingrained these ideas in us that though today you may not hear a man say that is unladylike, or that is not, we have that at the back of our minds reinforced by media and educational institutions. So ingrained that even as women demand that they be treated equally, they can still treat a man better than they would themselves. Imagine this; at a conference on domestic violence, a woman greets a fellow participant by bowing for her back to be pat? I wonder, aren’t they both participants? What more if they were in a domestic scene and the man is so-called head of house? How then could she ever truly expect equality, she has never expected such a greeting to be done to her. She lowers herself and makes herself open for abuse. Women’s brains are not free, and as such their plight despite their might goes on.
Another instance that taught me this lesson, a case study from a practical Gender course which showed that African women who were given money by micro credits to start a business went home and gave their husbands, and those who did not give the men everything asked for their permission and opinion as to what they should do with the money. The crux of it is not sharing with your partner, but rather the fact that they should feel the need to depend on the men for their opinion and permission, and that that need should surpass their own logic that they sacrifice opportunities of independence and self-sustenance in being healthy. This shows that no matter how women are given aid, until they have a new mindset to go with that aid, they will still end up dependent and subordinate
Women have accepted their subordinate position in their minds and from generation to generation this idea has been passed on from childhood when a girl hears her brother told “take care of your sister”. No matter if the sister younger or is 2-5 years older. We could debate the issue of submission using the oft-quoted Christian bible passage that demands submissiveness of wives to husbands, but in modern day when there are nearly as much atheist and agnostics as religious fanatics, what can explain the fact that an overwhelming amount of women from all points of the globe and walks of life still feel that they cannot and should not be equal to the opposite sex. Mind that equality is not sameness, but fairness in treatment, equity in judgment. What makes a breed that outnumber another to define themselves; how they should look, what they should wear, how they should behave, what is “right” on the whims of another?
It is baffling is it not, that the woman who could raise five children on her own cannot raise her voice to defend herself when mistreated.  It is this wonder that leads me to question the various approaches that crop up to address women’s absence from political/legislative scenes, their relative poverty, and general marginalization. How can we think of demanding rights for a people who have yet to be convinced that they are “alright”. The problem is not that women don’t have a voice, they do, they just censure how they use it based on how they have been socialized. It is therefore ok, to use that voice to correct a child, but never to correct your husband or male colleague. Its not that they are not able, women are more than capable. I am of the opinion that a woman is more handicapped by her warped self-perception than by the legal and economic inequalities.

To answer the earlier question, why despite all proclaimed might do women suffer their obvious plight? Women may have the power of majority, but Men have power over their minds. Until they take it back they can and always will be controlled.
Share
0