Travelogue: S.A has me thinking we’re cursed… but not for the reason you think

Ask Yourself: What am I supposed to Be Learning Now?

Undoing a Culture of Shaming

How do you write about being ashamed of what you are to be proud of? I will try.
***
A few weeks ago, a friend and I discussed her options as a mother. She has to travel out of the country and was asking for my input regarding leaving her children with her family back in Cameroon. As we discussed the issue, she mentioned that one of her greatest fears regarding leaving her kids with family to raise is their shaming of children, which they practice even in her presence, talk less of in her absence. Her thoughts triggered several recollections of my own childhood. The number of times I was compared with others: “Why can’t you be like C”, “D who did X or Y, does she have two heads”? “Why can’t you ever do things like X?”
I recalled reactions to wetting the bed at 5; being told to stand outside on an anthill while your peers and older relatives alike ululate “shame”. And later on, my name being called on the list of the ‘bottom’ ten to be publicly embarrassed before the entire school as not ‘smart enough’.
If you’re Cameroonian you’re familiar with such, and most of us got over it. We laugh about these recollections if at all we remember them. And, unfortunately, a lot of us repeat it. We pass on the buck to our own children because, after all, it worked. Shaming is not an exclusively ‘African’ or ‘Cameroonian’ thing. It’s global. Yet, I think our culture is one of the few which has yet to address the negative effects of this practice, probably because we’re so busy trying to survive physically that we haven’t considered mental and emotional health as much as we should. So we still celebrate shaming. It is seen as an effective instrument to get your kid in order. Competition is healthy after all, so shame one person so they will strive to be like the other. The fact remains: it works. 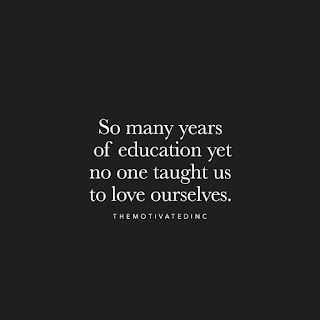 But it works in more ways than one: it works to create unhealthy stereotypes, like in determining what intelligence is; it works to further internalized misogyny and destructive competition between women, who live to avoid shaming or grow to believe they must be better than the next woman and thus bring the other down. Shaming works well, above all, as a destroyer of self-esteem; something we find out too late that we need for literally every part of adulting. Shaming is the bacteria we are infected with as children, one that was to act as a vaccine against complacency and build resistance for a competitive world. Yet this ‘vaccine’ eventually does more harm than good. If not curbed, the ‘bacteria’ grows and spreads. It takes root in our minds, destroys our self-image, tarnishes our ability to empathize with others, and dehumanizes us.
We see it regularly, particularly among women. There’s this urge to say “at least I’m better than so and so”, because we feel we can only be enough in comparison. Not by ourselves, not as we are. Comparing women to each other to make one feel lesser than the other is a sadly common and accepted practice. Nearly all entertainment news offers a segment with “who wore it better” comparisons and lifestyle mags intentionally ‘other’ women with articles that compare them and create one set-in-stone ideal. Is it any wonder then that we feel “you are not like other women” is a compliment? 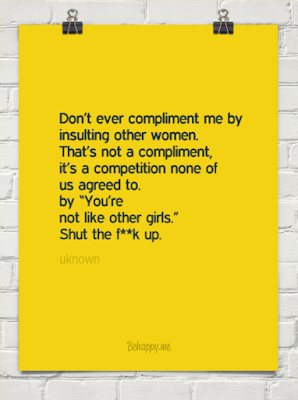 As is the case with things which are common, I had taken our shaming culture and competing with other women in stride and for granted. That is to say, though I acknowledged them, they were not things I considered with depth. I’ve been on a journey to self-love for most of my adult life – and I’m still on it –, so I was too busy trying not to think of myself as lesser to bother thinking of someone else as lesser. Yet, recently I was given a rude awakening to this practice and its effects on me – aside from the earlier mentioned conversation with my friend.
***
A week ago I posted the following tongue-in-cheek post on Facebook:


Tips to know if you should comment on someone’s weight:
1- Did they ask you?
2- Are you their doctor, sponsor/guardian of their health?
3- Are you an intimate friend/partner who is permitted to share any and all opinions? (note that I didn’t ask if you were related, that doesn’t count)

If you answered no to all these, here’s the tip: Shut up.
As I expected, most of my friends who commented on the post assumed someone had fat-shamed. So they either shared their own experiences with fat-shaming, proffered similarly barbed ‘tips’ to fat-shamers, or tried to assuage me with idioms along the lines of ‘you are not fat, you have fat’. I said nothing. They had assumed wrongly that I had been fat-shamed, yet their reactions proved why I felt bad about being praised for having lost weight recently. 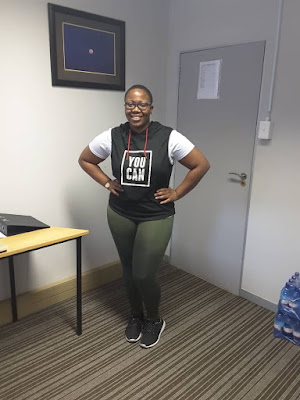 Actually, my post was inspired by comments from a few people, who gave me a rude awakening when they approached me to praise me for my recent weight-loss and, in so doing, compared me with either another woman or worse, with myself.
The back-handed compliments included:
“Ooo Monique I’m so proud of you! See how better you look now! If you had started this sometime back you would be married by now I bet!”
“Wow, Monique! You have done it oo! Please tell [X] to follow your example. With your new looks and everything else you will pass those slay queens”

“I can see you’re working on your weight; that is good. I’m proud of this new you, she is definitely better”

And, with these comments, I felt shame. Shame because, suddenly, my weight-loss journey, something I should be proud of given that it is a testament to my growth in other areas of my life (mental, spiritual, and emotional) was suddenly made shallow. It was being reduced to me finally fitting in, meeting social standards of what beauty is. I felt shame because I told these people ‘thank you’, even though their compliments felt slimy. After all, when you say ‘thank you’ to someone who has said you are now improved based on your ‘new look/size’, aren’t you agreeing with them that you had been less than before? 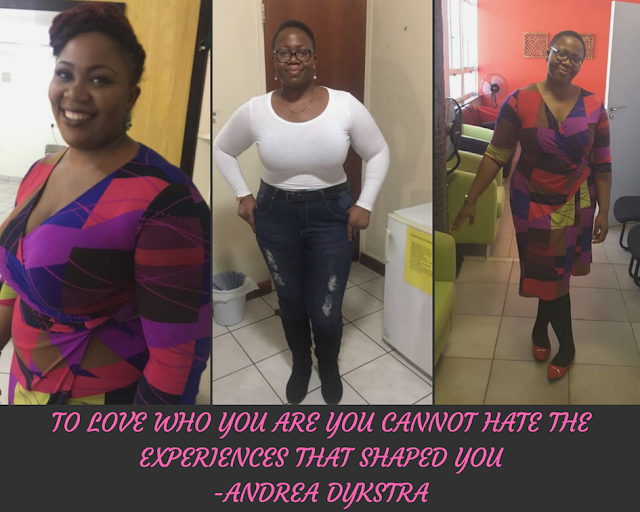 These people are friends, I don’t mean to ‘shame’ them in a post talking about shaming. I don’t even know if they will read this post, but I hope they do and recognize their words. Above all, I am writing because this has been on my mind and I hope they – along with others – would read and understand why their words are unsatisfactory.
***
I may be wrong, but I believe fat-shaming is the most popular form of shaming in our society. If not, I think it comes second only to intelligence shaming. The most popular insults in my experience have been “fool, stupid, fat, and ugly”; often combined for maximum effect. It’s generally accepted that no one wants to be FAT (or stupid), it is an unfortunate thing we must all fight. Curvy, yes; a round ass and big boobs are fine if you have a thin waist and skinny legs and are not short and, and, and… God alone knows who came up with this nonsense. But we’ve accepted it as the ideal for women. And because it’s widely accepted, this fat-shaming is accepted too. 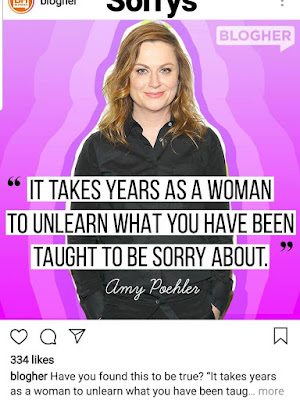 People with no medical knowledge at all feel the need to offer unsolicited health advice to fat people. Feeling stressed? It must be your weight. Have acne? It’s because you don’t exercise. Nearly everything but your finances – and sometimes even that – would be better if you were the ideal size, but you’re not. Fat-shaming is accepted because, as in the case of calling out names of the ‘bottom-ten’ students with regards to academic performance, it is supposedly for the person’s own good. They’re supposedly shaming you because “they care about you” and want you to be a better you. The better you is slimmer and passes standardized tests.
It is because fat-shaming is accepted that, within the past month lone, two male acquaintances have dedicated their WhatsApp statuses to fat-shaming.
One (let’s call him ‘C’ with the hope he’ll recognize himself) felt he needed to rant about how “fat people are unseemly, smell because they have more flesh to sweat through, can’t even walk well, and almost always have health problems”
Another (he shall be reduced to ‘D’, the initial of his name) made several posts featuring Instagram fitness models, saying “This could be you and I but you’re not working on your body”. Suggesting, of course, that women who aren’t as fit as these models don’t deserve him. Because he believes he’s too good for them. 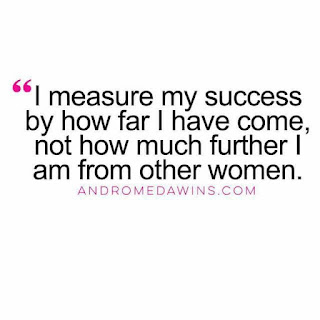 Fat-shaming is not always as obvious as this and, to be honest, it’s not something I have taken issue with for a while now. With the crop of body-positive content on the liberal media, I had formed my own image of the “ideal” by the end of 2017. In fact, I had genuinely accepted myself – fat and all –, so much so that I realized that other areas of my life had contributed to it, areas I needed to work on and not continue escaping from. As renowned psychologist, Carl Rogers is noted for saying, “The curious paradox is that when I accept myself just as I am, then I can change”.

What has brought fat-shaming to the forefront for me recently has been the need to make it clear – with every back-handed compliment – that mine is not the average weight-loss journey, and that I am not the one you should compliment on being thin for thinness’ sake. My goal is not to be who you think I should look like, my goal is not to be better than another woman, and I refuse to be made to feel bad about who I have been, especially considering that who I am becoming hinges on the sum of ALL my experiences. So yes, I have lost weight, yes I do plan to and will lose more. But being thin has never been my goal. I’ll always be fat by society’s standards. Or, as I like to think of it, Fatté… 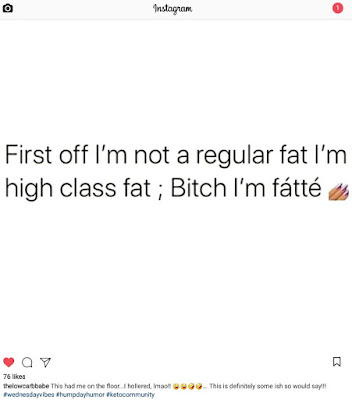 Like any other person on a weight-loss journey, I have made collages of myself at the start of the journey, along the line, and now. I make these ‘before and after’ pictures when I hit milestones. They show my progress, they serve as a great boost to my efforts – especially as the scale doesn’t move as easily as inches go. But I felt shame (shame and fear, to be honest) with every collage I made. So, I shared them only with a few people. I have realized that what has held me back from sharing them wider, from being more ‘proud of myself’, is my fear and shame of being associated with the kind of people and thinking that has shamed and hurt me and made people like me feel lesser than. 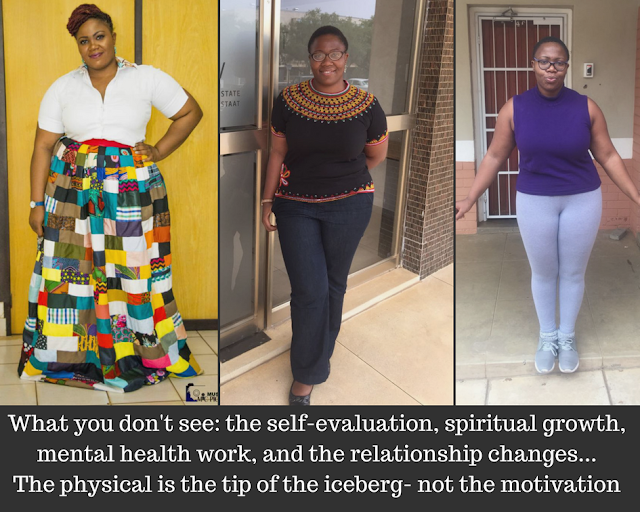 So I needed to write this, you see, as a reference for myself as well as others. So it could be understood that, while I feel proud of myself for hitting weight-loss milestones and will be appreciative of compliments I receive, I am also very proud of who I was: ALL Monique’s are worthy. I do not want this to be used as a comparison to anyone by fat-shamers. I’m not the fulfillment of the “she finally decided to take care of her size” campaign. This is to remind myself, and anyone else that will need it, that I had been beautiful at any size.

This thing is more of a mental struggle than physical… 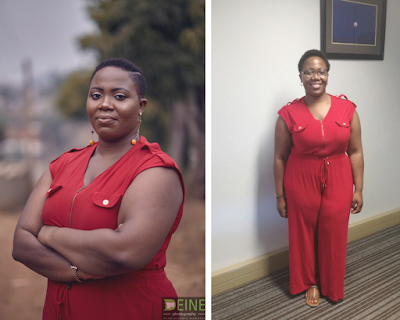 In truth, it always has been. 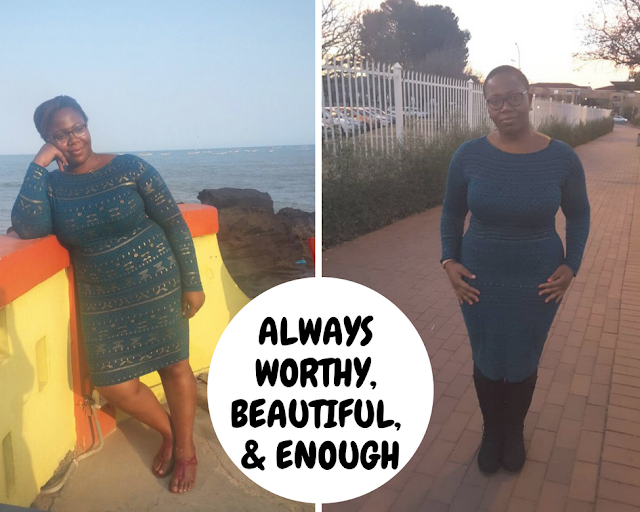