On the 10th of October 2016, Lawyers in two out of ten regions in the country went on strike/industrial action, after giving the government fair warning in 2015. For two weeks they sat home and did nothing. No one paid them any mind, in fact the Minister of Justice insulted them. They took permission to hold street protests (confirm) and after successfully marching across Commercial Ave (with a crowd of people joining them out of curiosity) their union president gave a speech calling for the end of the protests, thanking his colleagues and police who he claimed had “behaved like police of America and Britain “. He praised them prematurely it seems, because by the time he finished the police aimed teargas at their group to disperse them.
Well two weeks after that incident teachers- the most populated occupational field in the nation- decided they would go on strike too. To support lawyers and to bring attention to their own issues with the government’s attempts at harmonization which tend to be more of an assimilation of one system by another. Of course this particular strike won’t be limited to the workers. It would also mean students, their parents in other professions etc. would be affected. THE MAJORITY OF THESE PEOPLE WERE NEVER FORMALLY OR CLEARLY INFORMED OF WHAT EXACTLY THEY WERE STRIKING FOR NOR FOR HOW LONG THIS WOULD GO ON. This omission was allowed to slide because we all know there was a problem with the way our government marginalized our unique systems. So we didn’t bother to define the problem knowing that there were, what harm could come of not knowing exactly which one we were fighting eh?
Well as the strike progressed, language changed. The fact is, the issues raised by teachers and lawyers were a result of a much larger problem- the Anglophone problem- the problem our government tried to ignore and which a lot of our citizens have been unable to correctly diagnose. So language changed, it was no longer a fight for industrial action but gradually becoming a political revolution fueled by long repressed anger over the Anglophone predicament in this country and being used as an opportunity by a group of secessionists calling themselves Ambazonians (the name they had given the citizens of a country yet to exist which they are fighting for).
In an attempt to ignore the strike thinking it would go away students of the University of Buea were called to school to write tests. However their teachers had set no tests and no one would be there to administer them, the administration basically attempted to show they were superior to the teachers they administer and it backfired. After two weeks without classes, students turned up and saw empty classrooms, then proceeded to storm the administration building and vent their anger. In the absence of the VC, the Director of Students Affair approached the students and asked for representatives to take in to see the VC’s deputies. The crowd chose the most vocal to represent them before the VC’s deputies.  They presented their issues: 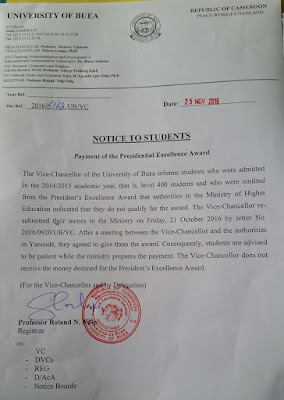